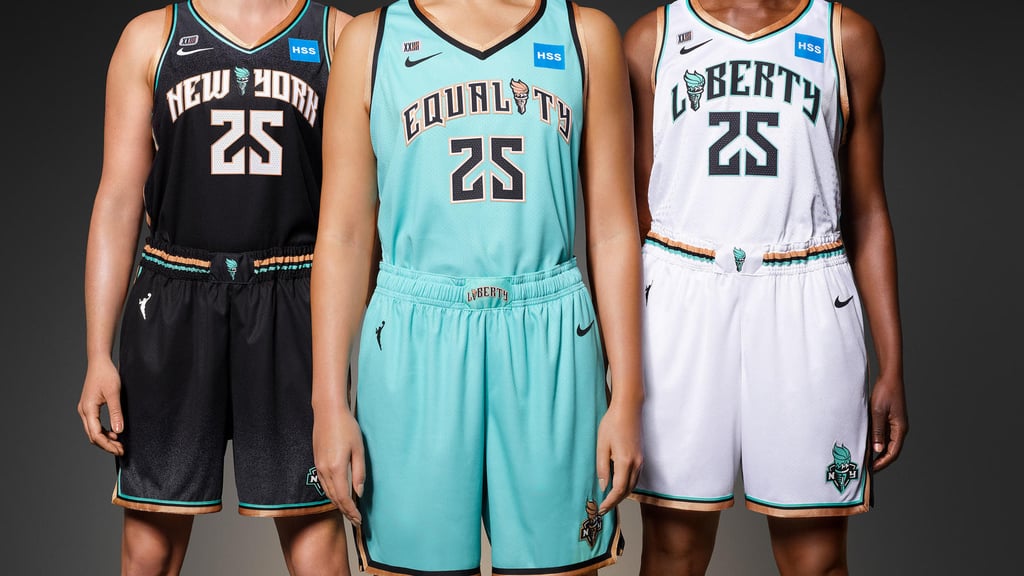 The WNBA is heading into a historic 25th season, so it's only appropriate that the players are outfitted with uniforms that make a statement. Nike came through with three iterations of new uniforms for each of the league's 12 teams. They include the WNBA Nike Heroine Edition, which is the white home-game uniform; the WNBA Nike Explorer Edition meant for players to wear on the road; and the WNBA Nike Rebel Edition inspired by the teams' respective cities. Some of those Rebel jerseys also pay homage to woman empowerment.

Other cool features? Nike's comfortable and cool DRI-FIT ADV technology, and every jersey is numbered 1/144, honoring the 144 spots across the league open to (and earned by) athletes season after season. As Seattle Storm guard Sue Bird told POPSUGAR, "It's been the biggest game of Hunger Games you've ever seen because with each draft class, you got to play. You got to show up, you got to play, or else you will not make a team." The fit of the uniforms is improved as well due to feedback from players.

Tania Flynn, Nike VP of Women's Apparel Design, told POPSUGAR, "Before, the WNBA actually only had one uniform. It was one templated uniform, which means that across all 12 teams, it was the same exact cut-and-sew design. And the only variation was really through color and team graphics. So this is the first time in a long time that we're able to have the ability to tell these really unique stories of female strength and empowerment and an ability to inspire not only the athletes, but the fans and the cities that they represent."

Bird, who offered her opinion here and there through the design process for the Seattle Storm uniforms, approves. The four-time Olympic gold medalist and national champion and two-time NCAA title holder also told POPSUGAR, "From a fit standpoint, Nike really did a great job of asking all of us what we thought. In our league, we have so many body types, there's so many different answers to that question from so many different people. They did a really good job of taking that input and putting it to life."

Seattle Storm's Nike Rebel Edition jersey stands out to Bird. It's black and has "Seattle" in big block graphic text against "grunge" white as an ode to protest signs used to promote equal rights for women, according to Nike. Other examples of women-inspired Nike Rebel Edition uniform come from the Washington Mystics and Chicago Sky. The Mystics now have the language of the 19th Amendment written across their Rebel jerseys, and the glass-ceiling-like pattern from Chicago Sky's jersey represents the women of Chicago shattering that ceiling. The former also showcases the word "Rise" printed boldly on the front to, as Flynn further explained, "broadcast to women that it's our honor and our responsibility to rise up for what we believe in."

Each WNBA jersey is adorned with the WNBA's new tally logo to coincide with the league's "Count It" campaign for the 25th season. The logo, announced last month, is the Roman numeral for 25, but it includes five tally marks instead of a "V," to, according to the WNBA, "celebrate the ways its players have shattered expectations and have stood at the forefront of advancement, inclusion, and social change for 25 years." It means that more is yet to come.

The league, Bird noted, is made up of diverse athletes — based on data released in 2019, over 80 percent of players identify as people of color, and there's a "large LGBTQ representation," she said — so when that's the case, when "basically all the things in our world that are marginalized, when you have a league where that's the makeup, you're always going to be about social justice."

"People were like, 'Oh, shut up and dribble.' We would've loved to. You didn't let us. You never wanted to talk about basketball. You always want to talk about what we looked like or what we couldn't do."

Nike has made the WNBA game uniforms since the 2018 season — though it has partnered with the WNBA since its inception in 1996 — and Sonja Henning, VP of North America League Partnerships, told POPSUGAR that Nike has always been committed to growing and supporting women's sports at every stage. The WNBA, she said, is "truly showing how women have been empowered through sport and can empower." She added, "So much of what they're doing aligns with Nike's own values and our own purpose to truly be more than just an apparel company and a footwear company. We know that we're committed to our consumers, meaning athletes, in every part of the world. And especially right now, our priority has been women. What we can do for her."

You can also learn more about the new Game Theatre (team) and Team 13 (fan) apparel collections, separate from these athlete uniforms, plus further information about Nike's continued partnership with the WNBA, on Nike.com (select items from those collections will be available on Nike.com beginning April 14). Ahead, check out a sneak peek of some of the new WNBA uniforms — we've elaborated on five that we're most excited about. We know these players will wear them proudly!