Jessica A. Gonzalez is a writer based in New York.

From childhood through young adulthood, I've always had (at best) a vague sense of diasporic confusion — I never felt truly American, nor Hispanic, nor Asian enough. At its worst, the confusion would manifest into a form of self-loathing and envy of those around me who could seamlessly identify with whatever they chose (at least, to my eye). My ethnically ambiguous appearance didn't help things. Straightish hair, almond-shaped eyes, and brown skin with yellow undertones were not especially defining.

My father is from Vega Baja, Puerto Rico — the same place Bad Bunny hails from — and my mother is from Manila, Philippines. They met in New Brunswick, NJ, and I was born about a decade later. I grew up eating arroz con habichuelas and chicken adobo. By age 4, I was responding to both of my respective grandmothers in either Spanish or Taglish (a Tagalog and English hybrid commonly spoken among Filipinos in both the US and the Philippines). 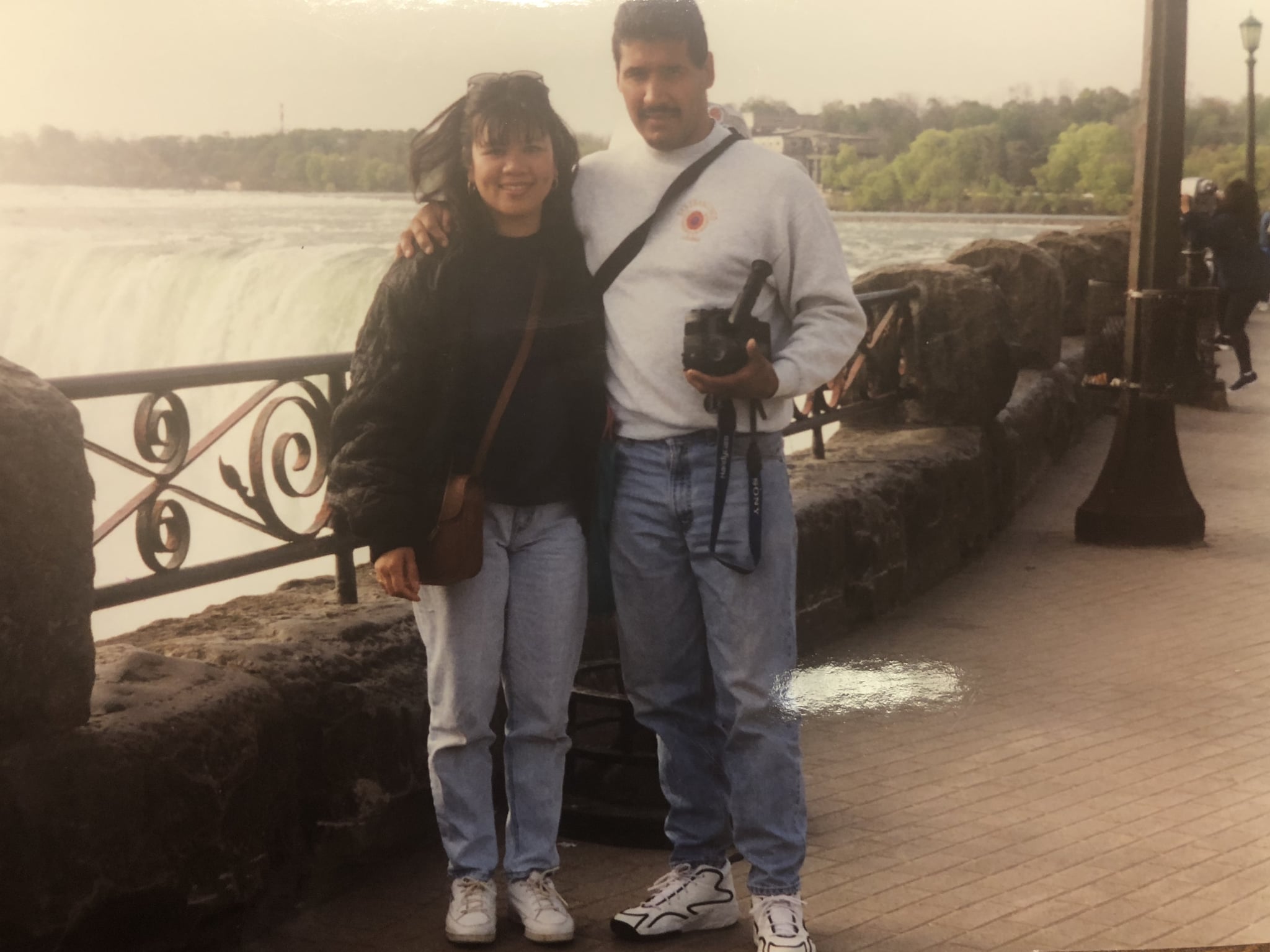 Being raised closely in both cultures as a half-Puerto Rican, half-Filipina-American, identifying as simply "mixed" didn't feel like enough. It didn't feel fair.

Being raised closely in both cultures as a half-Puerto Rican, half-Filipina-American, identifying as simply "mixed" didn't feel like enough. It didn't feel fair. Along with my Philippine culture, I wanted to reclaim my Latina heritage in my own right. That was very important to me. This naturally took a toll on my confidence and sense of belonging.

Eager to carve out my own take on the identity I was given (later realizing I was blessed with), I looked to different outlets to help me feel more in tune with being Latina and connect to other Latinos around me. I wanted to feel like I shared something in common with them even if it wasn't at first obvious.

Related:
This Is What It Was Like to Grow Up as a Half-Latina

Music has always been emphasized in my family. Because of my parents and grandparents (I was raised by all of them), I listened to a mix of salsa, merengue, bachata, boleros (I like to think my Filipino grandpa embraced his Spanish roots this way), '70s disco, and '80s and '90s pop a la Janet Jackson.

I didn't turn to music to consciously help me further embrace and learn my Hispanic culture until I was about 9 years old. At the time, I had just started at a new school that wasn't as culturally diverse as my old Catholic one, where mixed Hispanic and Filipino kids were everywhere (looking back, this wasn't too weird since many Hispanics and Filipinos tend to be Catholic). In fact, until I switched schools, I thought it quite common for people to be mixed in general. Because of the lack of diversity at my new school, I had the desire to hold on to my culture and found music a potent way of doing so.

I learned the words to Spanish songs I'd only heard in my dad's car or blaring from the basement while he practiced the congas. I started with salsa classics like "No Le Pegue a La Negra" by Joe Arroyo and anything by Celia Cruz, El Gran Combo, Marc Anthony, and Victor Manuelle. These were songs I'd heard my whole life, but I was now intentionally listening to the words and connecting with them. 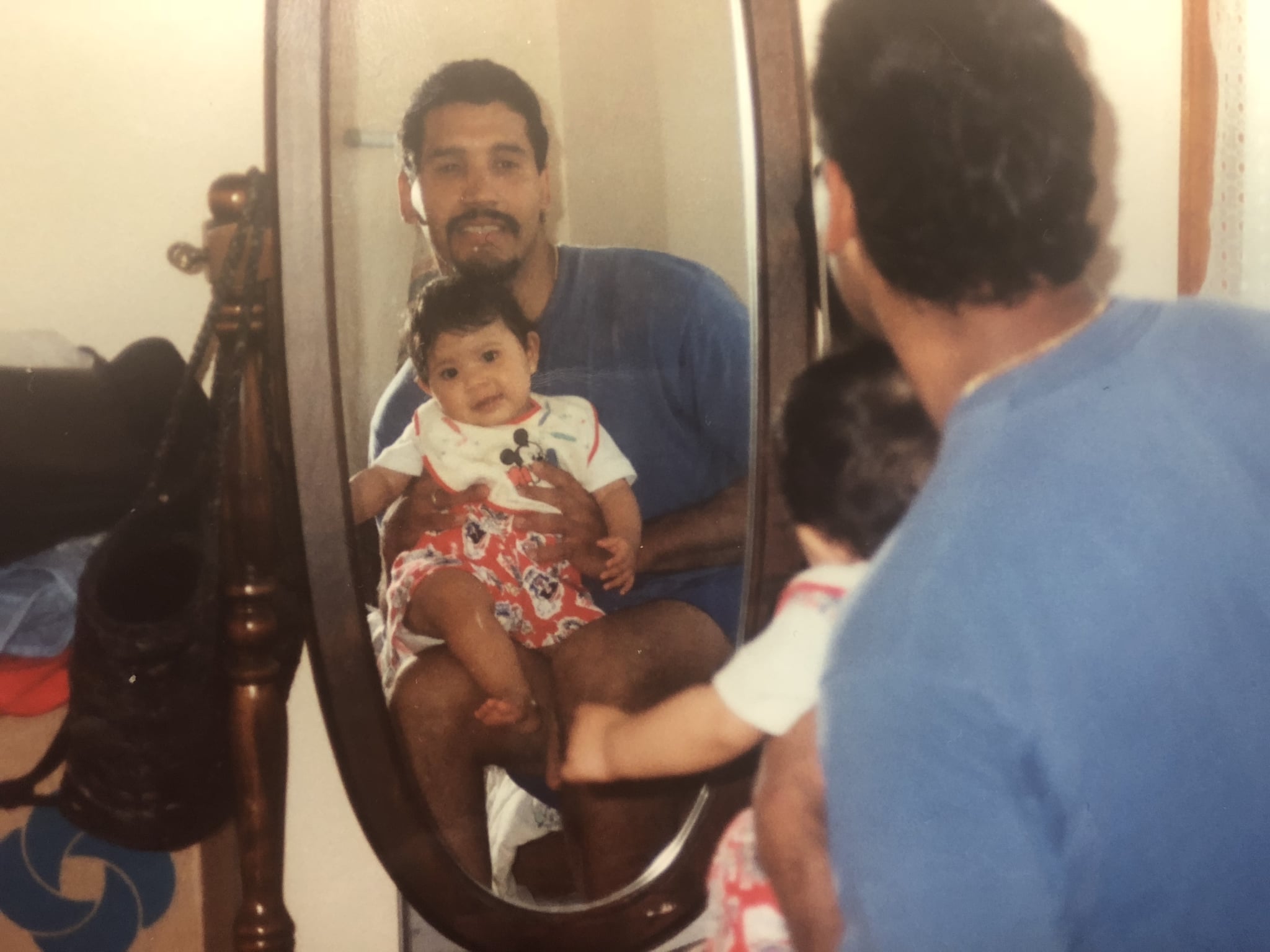 A '90s selfie with my father, el conguero. He has played the congas in the same Spanish-language cover band for almost 30 years.
Related:
Why There's No Such Thing as Latina Skin and Latina Hair Color

I looked to fashion and beauty, getting to know empowered style icons, from Selena Quintanilla to Bianca Jagger. It helped me pick pieces that I felt my best in and learn how to do my makeup to help me accentuate and ultimately learn to love the features I used to feel confused about.

I can't deny how discovering Latina and mixed-race style icons has helped me feel more comfortable in my skin. I looked to Selena and Jennifer Lopez growing up, but as I got older, I found seeking out mixed-race celebrities and models helped me feel more comfortable with my less-than-common physical features. I found people like model Jessica Gomes, who is a half-Chinese and half-Portuguese and proudly credits her mixed-race heritage for her striking appearance. 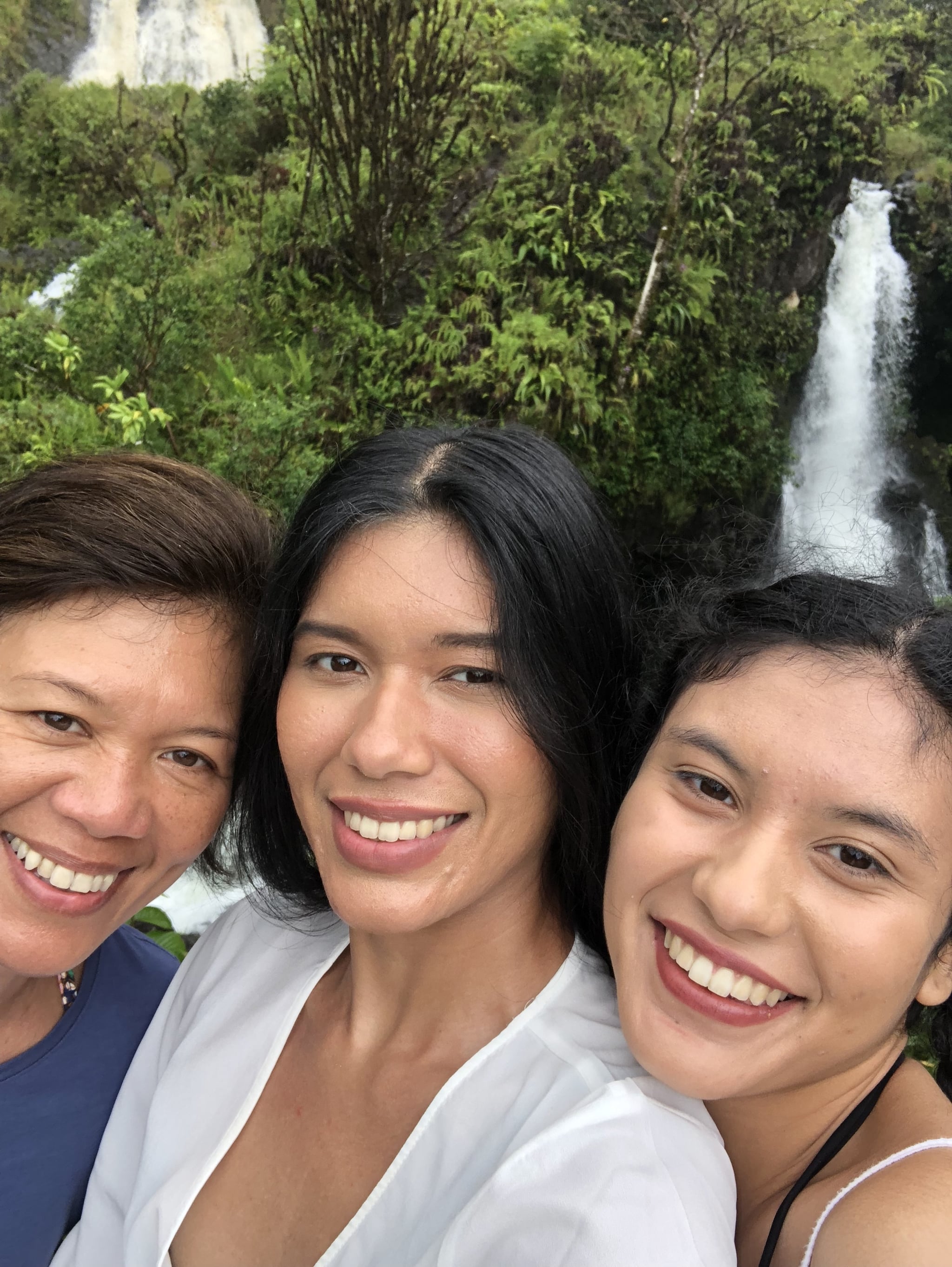 With my mom and my sister. Thanks to my other, I've grown to love my features.

I also turned to literature and language, reading Latinx authors to strengthen my Spanish and improve my understanding of Hispanic and Puerto Rican history.

I felt more empowered as a mixed Latina, armed with more knowledge of the beautiful history that nourishes my roots. Using pop culture, I was able to piece together my own interpretation of my mixed Latina identity.

Taking Spanish-language history classes in high school and college opened my eyes to the importance of understanding Puerto Rican history. My method of choice was reading memoirs and poetry. The gateway to my interest in Latinx authors and literature was a memoir about legendary Puerto Rican baseball player Roberto Clemente. His story of selfless courage — from occupying the space as one of the first Puerto Rican professional baseball players to his tragic but heroic death (he passed away in a plane crash on his way to deliver food and supplies to hurricane survivors in Nicaragua) — inspired me to learn more about important Puerto Rican figures in history.

From here, I discovered other Spanish-language authors, like Gabriel García Marquez, Pablo Neruda, and Jorge Luis Borges, among others. I learned about their respective countries' histories, strengthened my Spanish reading and writing, and garnered inspiration for my own writing. I felt more empowered as a mixed Latina, armed with more knowledge of the beautiful history that nourishes my roots.

Using pop culture, I was able to piece together my own interpretation of my mixed Latina identity. As Latinx people, we should always be looking for ways to empower ourselves and connect to those around us. It is only in these ways that we can keep the culture thriving and contribute to making the world a more accepting, comprehensive, and culturally fulfilled space.