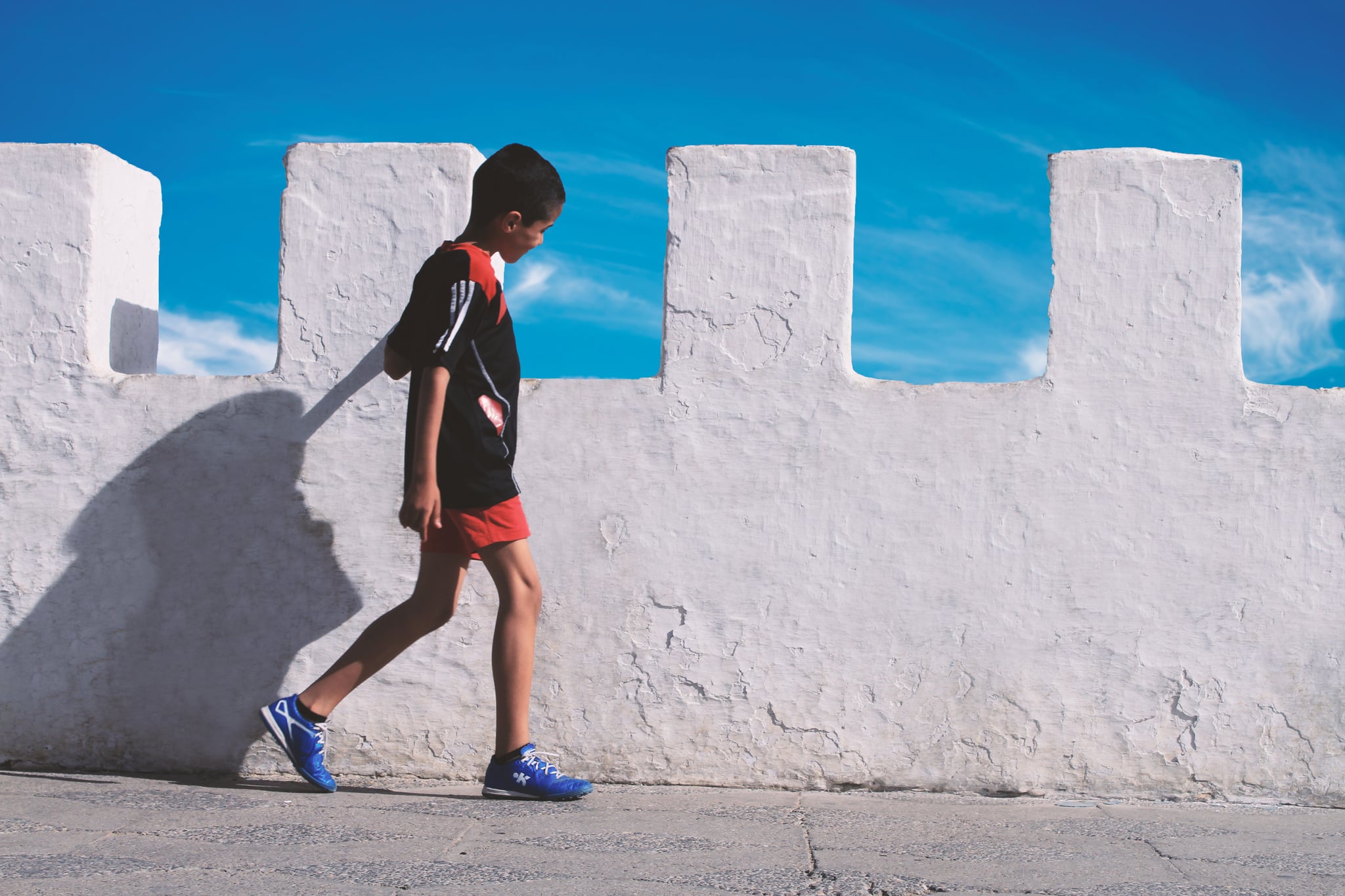 You know those kids who playfully splash their hands in the water table at the children's museum? They fill up the cups to pour them out again, making soft waves in the water while playing in their own personal space. That is not my kid. My kid is the one who runs up to the table with a big smile on his face as he slaps his hands and pounds his fists on the surface of the water. He picks up that tiny cup, holds it high above his head, puckers his lips to make the noises of a jet airplane, and nose-dives it, spilling water everywhere. To you, he looks like a misbehaved child, but what you don't know is that he has Sensory Processing Disorder (SPD).

When Camden was born, my husband and I had so many dreams for him already; he would be smart, kind, compassionate, polite, chivalrous, and active — pretty much perfect. We were your typical first-time parents, in awe of our sweet boy and every new milestone he achieved. When he started crawling at 6 months old and then walking at 9 months, we realized we were in for it. He was on the move, and he hasn't stopped since.

Related:
We Have a Pit Bull as a Family Pet, and We Couldn't Be Happier

Can you imagine what life must be like for him? Like someone or something else took control of your body?

Camden is an active 3-year-old who loves to dance and jump like most toddlers his age, but after just a few minutes, he's so wired that he'll run in endless circles, ninja-kick the air, and throw himself on the couch imitating silly sounds — something that's nearly impossible to bring him back down from. He struggles with temper tantrums, and I'm not talking about your typical screaming match that can end with an easy bribe. No, these temper tantrums are on another level. Anything could send him over the edge: his hair being combed, his shoes being put on, and even the wrong-colored breakfast plate. He has to choose his own waffle every morning, otherwise he'll melt into a tearful puddle on the kitchen floor. The control he needs is unbearable at times, but control over the simplest things, like his breakfast waffle, is the only thing about his body that he actually can control.

It wasn't until he started preschool that we realized our energetic boy was a little different from the other kids. The first time Camden's teacher mentioned he had a hard time sitting still during circle time, I thought it was just typical toddler behavior. She then mentioned he frequently bumped into other kids (not out of aggression), needed more direct one-on-one cues to complete a task, and also needed to be physically touched and stroked on the back before he fell asleep for naptime. These were just a few of the moments that pulled at my mother's intuition.

The school director then called me in to have a meeting about Camden's behavior. There we were, his two classroom teachers, the director, and myself all sitting at a kiddie table when they asked if I had heard of Sensory Processing Disorder. I went home and googled things until I fell asleep. It was like we had found the missing piece of the puzzle that is Camden. We learned that SPD deals with the nervous system and is like a traffic jam in the brain. When the brain tries to communicate messages to the body about things like sight, sound, taste, touch, and smell, the child has trouble organizing all of that information into its correct responses and instead reacts inappropriately. In other words, the software and hardware are all there, but they sometimes don't work together and cause "glitches."

There are several types of SPD. Some children can be sensory-seekers, others are sensory-avoiders, and some are both a sensory-seeker and a sensory-avoider. If we must label Camden, he is considered a sensory-seeker. He craves deep touch and fast movement and is always running, jumping, and hopping. He seeks out deep pressure to his muscles, tendons, and joints, which is why you'll find him crashing into a ball pit at the indoor playground or smacking himself into the padded walls of the jungle gym. Cuddling, hugging, and squeezing helps him feel more organized and focused.

Can you imagine what life must be like for him? Like someone or something else took control of your body? His sensory threshold is so high that he's constantly looking for some kind of physical input to help him feel grounded and calm. And although he may look calm sometimes, it doesn't mean that his body is. He's almost always in a constant state of high arousal.

Camden is a little different, but being different is OK. The diagnosis does not define who he is.

He's been in therapy for three months now, and my husband and I are finally getting a grip on SPD and what that looks like for Camden. Daily tasks like getting dressed and brushing his teeth are big accomplishments for him. We try to be as patient as possible, but some days we yell, some days we cry, some days we're mentally exhausted, and some days we feel like the worst parents in the world. To help calm and organize his sensory system, we focus on heavy work activities around the house, like wheelbarrow walks, frog jumps, and bear crawls. We give him resistant hand games like silly putty and Play-Doh and play tug-of-war every night. We do push-ups and yoga poses with him and use an exercise ball to help strengthen his upper body and increase his body awareness. With all of the physical activity we do in our house, you'd think we were training a future professional football player.

We have to get his therapy just right — it's called a sensory diet (no, it doesn't involve food) — otherwise it will send him into a sensory overload. One week he became so overstimulated from all the different sensory work during his therapy session that it sent his body into a major frenzy even before we left the gym. His eyes glossed over and he was running around the lobby bumping and crashing into chairs. It took him the entire day to snap out of it. That same week, we went to Target and he had a full-blown meltdown at the door. You know it and you've seen it. The one where you see the mother and say, "That kid is crazy, can't she control her kid?" The answer is no, I couldn't control him. I didn't stand a chance.

We feel somewhat satisfied knowing that we aren't bad parents who just didn't discipline well, but instead finally have a reason for his behaviors and have a plan. Before I understood what SPD was, I was always making excuses for my son's behavior. He may look like an out of control little boy to you, but he's trying his best to give his body what it's asking for. What you don't see are those quiet, gentle moments at bedtime when he snuggles up close to me and says, "I love you, Mommy." You don't see the way he softly pats his baby brother's head and says, "Aww," as he bends down and gives him a kiss. And you don't see the way he runs at full speed into his dad's arms each night yelling, "Daddy!" as he walks through the door from a long day at work.

Camden is a bright, intelligent, and compassionate little boy — a little boy we finally understand in a way we never did before. SPD isn't a disease, it isn't a learning disability, and it won't affect his development. He'll grow up and may never even remember this time of his life. But I hope the next time you see another child having a public meltdown or crying hysterically because their foot accidentally touched the sand or playing too aggressively at the museum's water table, consider that maybe they're not just misbehaving, but rather dealing with an invisible disorder. Camden is a little different, but being different is OK. The diagnosis does not define who he is. We're on this new journey together, and we're now seeing the world with new eyes.