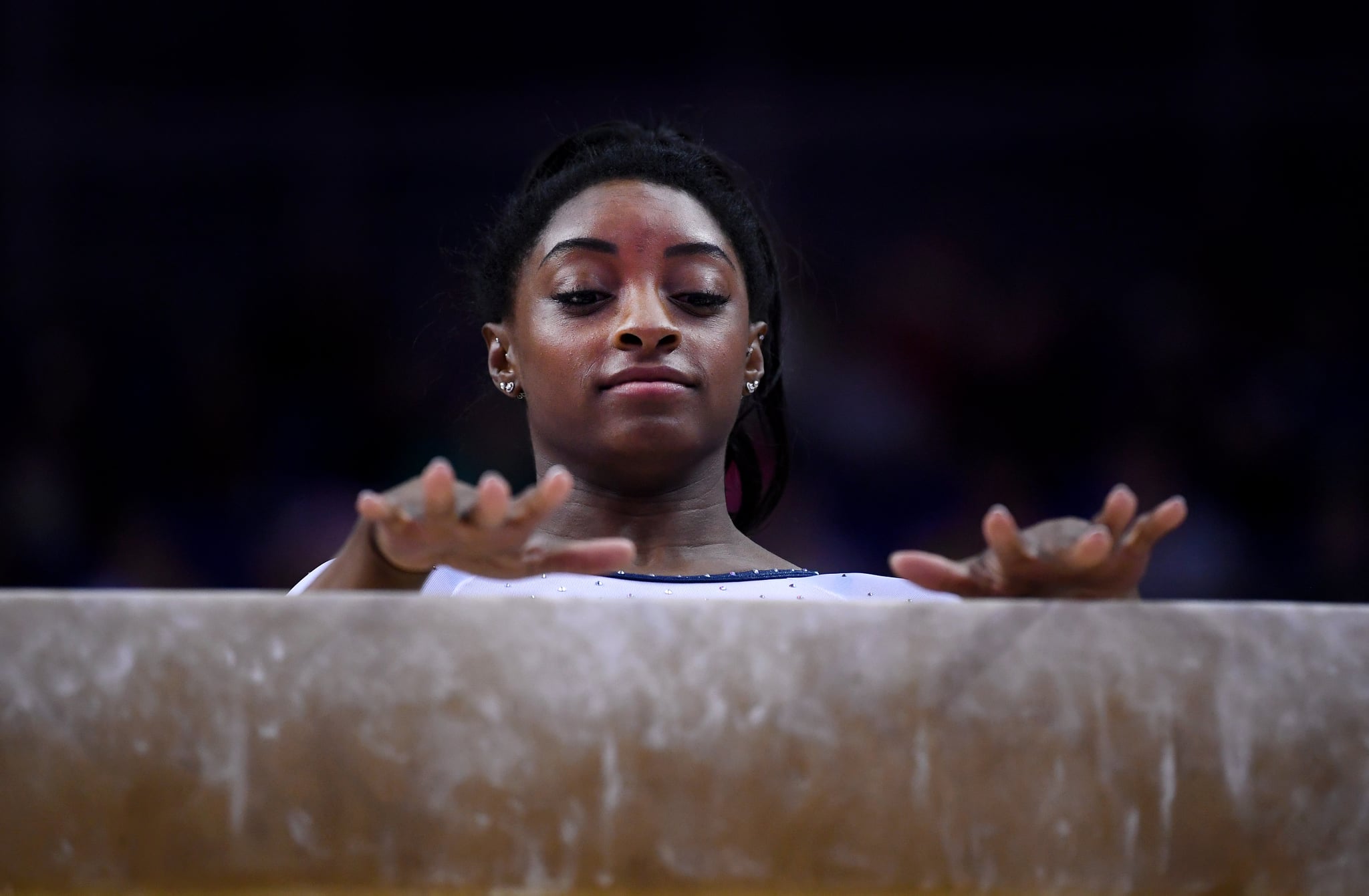 A four-person gymnastics team from the US is already guaranteed a spot at the Tokyo Olympics next Summer — they secured that ticket when they won the 2018 World Championships. Who will go, though, is still up for grabs, but we'll find out after the Olympic team trials at the end of June 2020. With this upcoming World Championships in Stuttgart, Germany — the qualification rounds start Friday, Oct. 4 — Simone Biles is en route to make history yet again. And when I say yet again, I mean it.

Simone has already won the most World medals out of any female gymnast (note: she matched Russia's Svetlana Khorkina record in 2018 but won by a tiebreaker since she totaled a record 14 gold World medals). If Simone places on the podium four more times at the 2019 World Championships, she'll surpass the record of 23 World medals earned by Belarusian gymnast Vitaly Scherbo during his career, according to the International Gymnastics Federation (FIG). Last year, Simone made history as the first female gymnast to win four World all-around titles, and a fifth victory this month would solidify that record. She'll be joined by teammates Jade Carey, Kara Eaker, Sunisa Lee, Grace McCallum, and 2016 Olympic alternate and University of Utah collegiate gymnast MyKayla Skinner.

What else could happen during Worlds, you ask? Simone could add another two skills to her list of gymnastics moves named after her if she lands them properly in competition. Those two skills are her triple double on floor, worth one full point in difficulty, which is basically unheard of in gymnastics, and her double double dismount off of beam (she did them both at the 2019 US Gymnastics Championships, if you need a refresher).

Simone told POPSUGAR ahead of her recent partnership with dental alignment company Candid that before Tokyo 2020, getting those two skills, aside from the two already in the FIG Code of Points, named after her is her main goal (she's already doing them in 2019 Worlds podium training, meaning it's safe to say the odds of that happening are likely). "Before the next Olympics, we only have a couple of meets leading up to it, so hopefully I'll get the two skills named after me, one on floor, one on beam," Simone said. "And that's about it so far." She went on to say that having her name in the record books forever is pretty cool.

With her sights set on those goals, Simone told us that she doesn't have any rituals prior to competitions (some gymnasts are superstitious and have specific coping mechanisms; I was one of those gymnasts). "Traveling all over the world, I feel like if you have superstitions, it might be hard to maintain those," she said, adding that once she switches gears to focus on the upcoming Olympics, her training schedule will look similar to what she's doing now. It's about six to seven hours per day — with Sundays off, she said — 32 hours per week.

When asked what she thinks the four-person team will be named at Tokyo 2020, she explained, "Usually you only pick a name if you win gold, so we kind of picked one going into the [Rio] Games that we would say only if we won. Then we ended up winning, so that's when we revealed the Final Five." She pointed out that, for the 2024 Games, the team count is already going back up to five people, as its been for years in the past. If chosen for the Tokyo 2020 team, and if they win, Simone said with a laugh that they could be named, "The Final Four? The Only Four? I have no idea!" We can't wait to see what records she sets next.