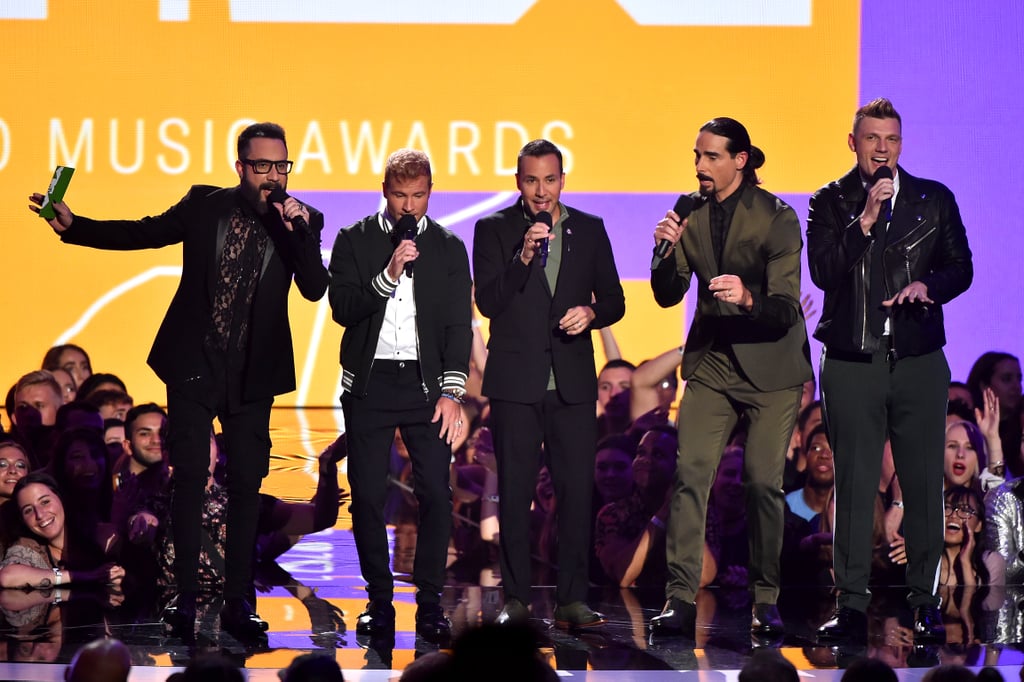 When Backstreet Came Back

For an older millennial — someone typically born between 1980 and 1990 — watching music award shows can be a glaring reminder of your mortality. I know I sound dramatic, but nothing has made me feel older in the past year than trying to tell the difference between Lil Xan, Lil Yachty, Lil Pump, and Lil Uzi Vert. And while watching the MTV VMAs on Monday night, I felt like I was finally understanding what it must have been like for those older than me, watching the same show in the late '90s and early 2000s and side-eyeing me for bopping along to the boy bands and pop princesses who were seemingly taking over the music scene. I found myself feeling particularly nostalgic for the VMAs of my youth: Britney Spears dancing with a python; Diana Ross jiggling Lil' Kim's boob; Fiona Apple telling the crowd that "this world is bullsh*t."

We're always going to feel strongly about the trends and pop culture moments of our adolescence. The "best" Saturday Night Live cast is usually going to be the one you watched when you were in high school, and the "golden age" of music is likely whichever age you grew up during (shout-out to the gangster rappers, bubblegum pop stars, and female singer-songwriters who influenced my own teen years). And as much as I enjoy a lot of the current popular artists who performed and presented on stage at the VMAs this year (you guys, I'm not a regular old millennial, I'm a cool old millennial), I was still hoping for some signs of the old MTV — before Teen Mom and YouTube personalities and having to distinguish between 20-year-old mumble rappers.

In small ways, MTV delivered on that. There were subtle nods to those of us old enough to remember cringing as Courtney Love threw her compact at Madonna during an interview with Kurt Loder (how '90s is that?) and cringing even harder when newlyweds Michael Jackson and Lisa Marie Presley made out on stage. This year's show welcomed iconic musicians to perform, reunited the cast of a beloved reality TV show, and honored the career of one of our generation's true triple threats. Here are the six things I identified with while watching the VMAs as an old millennial.

Related:
Is It Just Us, or Were These Moments From the VMAs Too Cringeworthy to Comprehend?
Previous Next Start Slideshow
NostalgiaMTV VMAsPersonal EssayAward SeasonOpinionMillennials

Nostalgia
Phat Tuesdays: Look Back at the Black Comedy Renaissance of the '90s
by Chanel Vargas 4 days ago