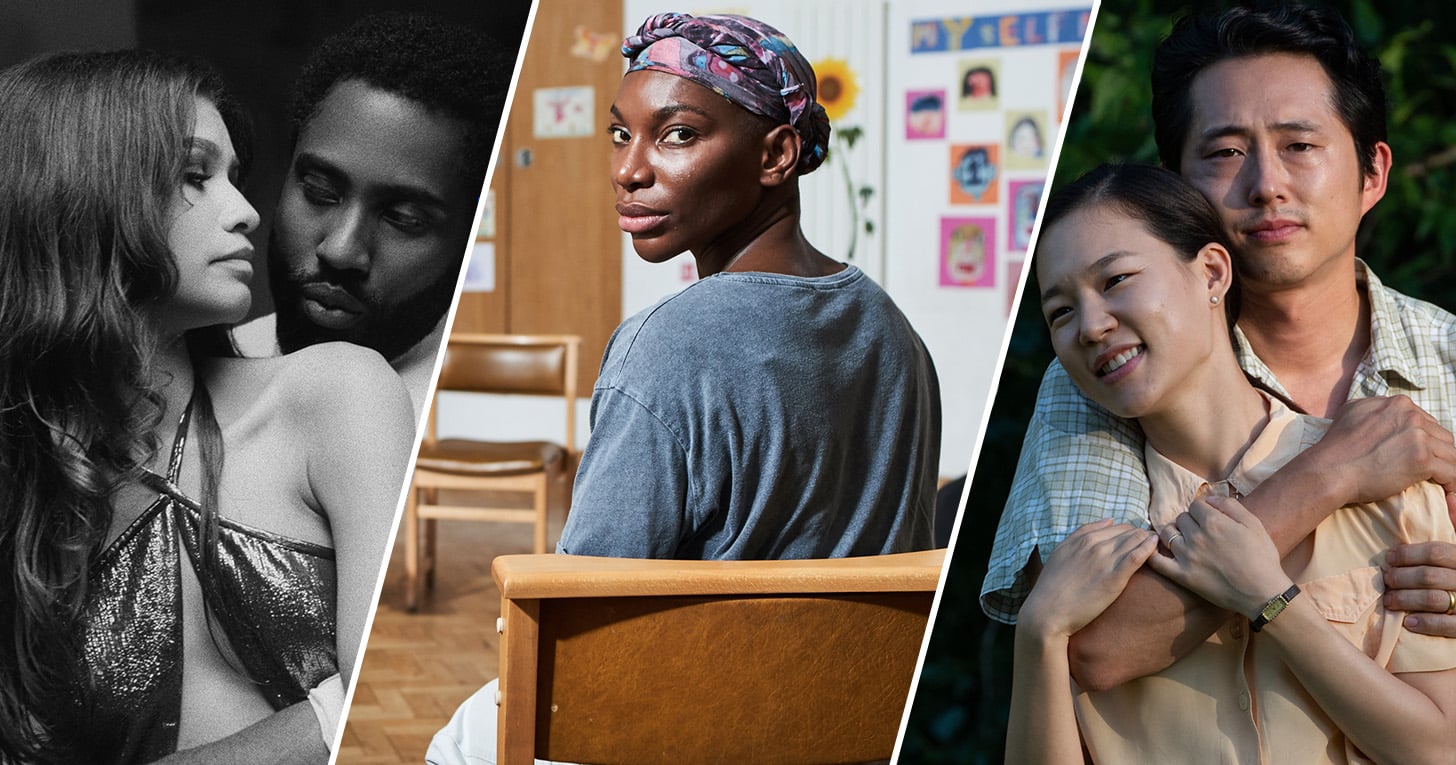 Oh, Golden Globes, aren't you tired of making me talk to you like this? Almost every year, the same story plays out: an award show drops its nominations, TV and movie fans rage against the generally racist and sexist nods, the actual award ceremony will hand out one or two historic wins to "appease" the crowd, and the year after that it happens again. Some would ask why we put ourselves through the cycle every year, but as Moira Rose said herself, awards season is our favorite season. But after a surprisingly stellar year for TV and film, we need to talk about how the Golden Globes decided to choose metaphorical violence with some truly ridiculous snubs on Feb. 3.

In the same year that movie and TV lovers were given gems like I May Destroy You, Minari, Never Have I Ever, Lovecraft Country, and hell, even Bridgerton, we have to deal with overwhelmingly white nominations, with shows such as Emily in Paris and Ratched nabbing top nods. Do y'all even remember what happened in Ratched? I ask because I genuinely forgot it even came out. I said this back in 2019 and I'm saying it again: looking for diversity during award season will probably be a never-ending battle in Hollywood. But as long as we have creators and actors blessing us with cinematic gold like Steven Yeun in Minari, Delroy Lindo in Da 5 Bloods, or Wunmi Mosaku in Lovecraft Country, we're going to keep calling out these glaring omissions. It almost feels as if the industry is pushing back on the multitude of diverse nominations from 2020's Emmy Awards. (Though that wasn't without its problems.)

Normally I would say that I don't want to pit productions against one another or call out actors because everyone works hard, and it isn't their fault that the Golden Globes decided they deserved the nomination, but let's go there. James Corden for The Prom? Are we just giving people awards for working now? To say that Corden received terrible reviews for his role is an understatement, but somehow he was the only person to score a nomination from a cast that includes Meryl Streep and Nicole Kidman! Emily in Paris, which scored two nominations for best comedy series and actress in a comedy series, has been hailed as one of the most problematic guilty pleasures from 2020. As much as people might have enjoyed watching Emily be insultingly mediocre while failing upwards, that doesn't mean it deserves a nomination, especially for best comedy series. Why not use that nomination for a series that viewers enjoyed without controversy, like the gloriously fresh fourth season of Insecure, which was at least recognized with Emmy nods.

Related:
Somehow the Golden Globes Snubbed Bridgerton, One of Netflix's Biggest Shows of 2020

The exclusion of Yeun in the best actor category is especially a slap to the face after distributor A24 submitted Minari as a foreign language film because of an experience with HFPA. When speaking to Vanity Fair, filmmaker Lee Isaac Chung explained that A24 made a similar decision with the 2019 feature The Farewell, suspecting that it wouldn't qualify for any of the top nods. "It had to be in the foreign language category," Chung said. "So, they decided that we needed to do the same with Minari, that there's no choice available for us otherwise." But Chung noted that he didn't feel that it was the fault of the HFPA, saying that the situation had more to do with what people are used to than anything else.

"We need to keep showing that the categories that are there are not necessarily fitting to the reality of who we are as human beings." — Lee Isaac Chung

"I think it's more indicative of what cinema has been like in America for the past so many years. Any time there is a film in a 'foreign language,' in Spanish or Korean or whatever language, it's usually not an American film. It's usually from another country," he said, pointing out that most films made in America aren't in any other languages besides English, which led to categories like "foreign language film" in the first place. But changing that isn't solely on HFPA. He went on to note that it's "the entire culture. It's the filmmakers, it's the studios. It's the people who are watching films, the choices that they make and the types of films that they watch. We need to keep showing that the categories that are there are not necessarily fitting to the reality of who we are as human beings."

Chung is right, but at what point does the HFPA pick up what we're putting down and change their ways? It is incredibly frustrating that we have the same conversation every year with the same tried-and-true justification from those who love to play devil's advocate. We know that films and series featuring or made by people of color stood out this year — we wouldn't be this outraged if they hadn't. We don't have to argue whether those projects deserved praise or not — we know they do, and they've gotten acclaim since their releases. The fact that the industry chooses to reward the same stories from the same creators, and starring the same actors, is indicative of its refusal to read the room and realize the world is over their "colorblind" approach. It's as if every award show is a new reboot of a show that started in 1929, and instead of embracing new, bold ideas, they're just regurgitating the same narratives that they deem "safe."

Related:
How Are the 2021 Golden Globes the First to Nominate More Than One Woman Director?

At this point, award shows have become a game of "which marginalized groups will media organizations piss off the most?" Most of the time, that's BIPOC. Even when we want to say that there's no value behind these wins, the truth is that when white-led projects with the same cast, creator, and stories keep scoring trophies, those are the things that the industry continues to make. Even if they're making the same film again for the sixth time or green lighting another season of a show that insults an entire country, culture, and people. Those are the stories that the industry says are worth selling, and those are the productions that get investors and have no issues landing homes. It becomes ten times harder for other stories to come into fruition, like the one about a Black family battling supernatural enemies and period-typical racism. If Regina King wasn't so well-awarded (as she deserves to be), would we have gotten the masterpiece that is One Night in Miami? Most definitely not.

So despite the continued disappointment, awards still have value. That means that yes, every year, we'll be having this same discussion until we no longer have to. It's frankly embarrassing that it's 2021 and award shows like the Golden Globes continue to be so out of touch when it comes to keeping up with the times.