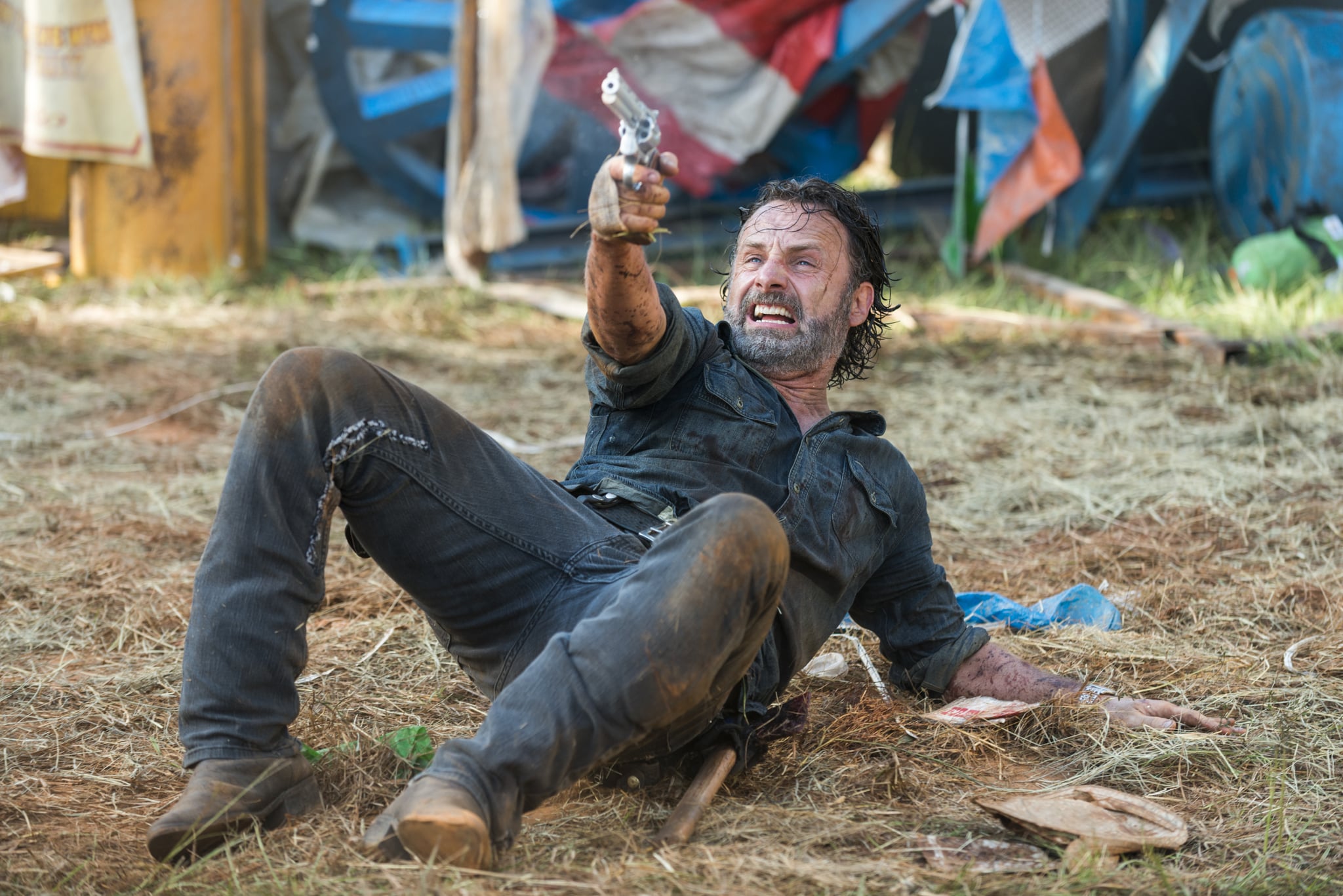 As The Walking Dead slowly trudges to its season seven finale, there's one big question that's still weighing heavily on everyone's minds: will the combined forces of Alexandria, the Hilltop, and Ezekiel's Kingdom (and possibly the Oceanside Community) be strong enough to defeat Negan and his loyal group of Saviors? We'll probably have a better idea when the seventh season comes to a close on April 2, but since the TV show has remained true to the comics for the most part thus far, it's safe to assume something similar is going to play out in a few weeks.

Major spoilers for the end of the Walking Dead graphic novels below!

In the comics, Alexandria, the Hilltop, and the Kingdom go to war against the Saviors, which is a bloody, lengthy confrontation between both sides that claims a few notable casualties. To give you some background, no matter how many bullets Eugene manufactures for Rick and co. and no matter how many sneak attacks the group organizes, they constantly come up short. An important blow against them happens when Rick gears up to make a strike against Negan, only to learn the Hilltop's leader, idiotic coward Gregory, has traveled to the Sanctuary and decided to pledge Hilltop's support with the Saviors (note: season seven's episode 14, "The Other Side," seems to put those wheels in motion).

Some of the Hilltop's members leave Rick's cause to join Gregory, which results in a few deaths on both sides. Holly (who no longer exists on the show, but whose story now most aligns with Sasha's) decides to sacrifice herself by slamming a bus into the heart of Negan's compound. She survives, but Negan captures her. Obviously that doesn't end well for her. He delivers Holly back to Alexandria with a bag over her head, and when Denise (who's already dead on the show) takes it off, it's revealed Holly has turned into a zombie. She bites and kills Denise. 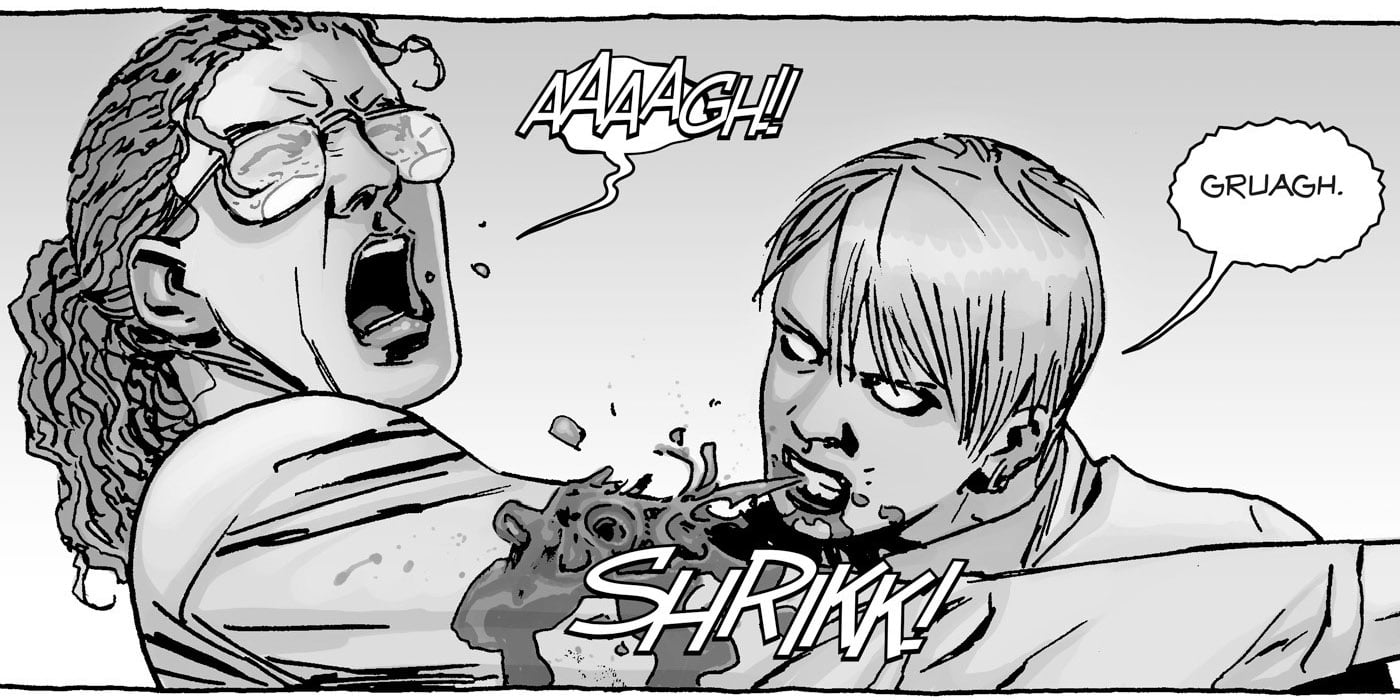 As you might remember from episode seven, Carl goes on an ill-fated Carl mission to kill Negan, ditching Jesus and stowing away in a truck. He mows down a bunch of Saviors when he gets to the Sanctuary but fails to kill Negan. They form an unlikely friendship instead, and Negan sends Carl back to Alexandria unharmed. The same thing happens in the comics after Denise dies. After that, Rick and Negan enter the book's "All Out War" storyline, and things get kicked into high gear.

A series of battles between the two begins, starting with a fight initiated by Rick. He and his army storm the Sanctuary, telling Negan to clear his compound of women and children before they strike. Negan, ever the gentleman, flat-out refuses, so Rick's crew opens fire and they're able to do significant damage to the structure (they take down a few walls, allowing zombies to flood the courtyard). Part One of the war ends when Negan's men retaliate by bombing Alexandria with grenades.

As the war rages on, Negan realizes Rick has finally become a formidable enemy and decides to cover Lucille and all of his army's weapons with zombie guts so anyone who gets cut or shot by them will instantly be infected. During one skirmish, Negan orders Dwight — who at that point has already become a double agent for Alexandria — to shoot Rick with an infected crossbow. He shoots so Negan won't suspect anything but makes sure the bow isn't tainted with undead innards. Rick is hit (but luckily survives), and the Saviors retreat. Negan and his men return to Alexandria later on to take over the Rick-less group, only to shockingly discover Rick is still alive and kicking. He implores Negan to end the fight and pool their resources so they can fight zombies together, only to lunge forward and slash Negan's throat. 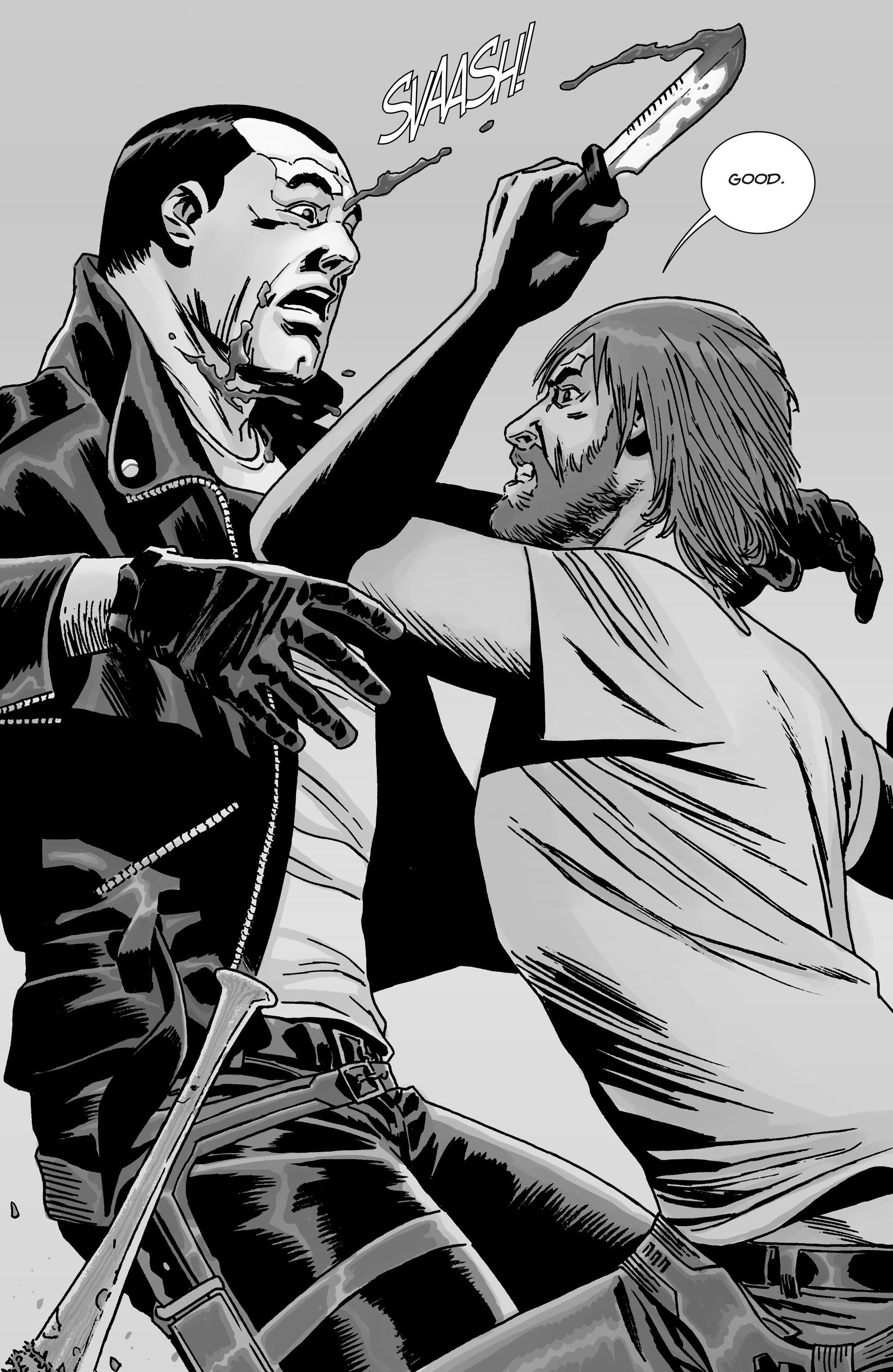 Don't worry! Negan doesn't die. Instead, the comics flash-forward two years into the future and we see Carl go into the basement of a house. He chats with a shadowy figure about his love life (a girl finally showed Carl her boobs, go figure), and the person asks Carl if he still wants to kill him. "Yes, Negan. You know I do," he replies. Turns out, they gave Negan a life sentence in Alexandrian prison. He still talks to Rick from time to time, even though Negan struggles to understand why he's keeping him alive. Later, a character named Brandon Rose helps Negan escape. From that point on he's MIA but still alive, as far as we know.

Now, there's a chance the show won't follow this to a T — it's already differed on a number of key plot points over the years. Still, we have a feeling Rick and Negan's relationship is headed this way.

Steve Martin
Steve Martin Announces Plans to Retire After "OMITB" Wraps: "This Is, Weirdly, It"
by Chanel Vargas 14 hours ago