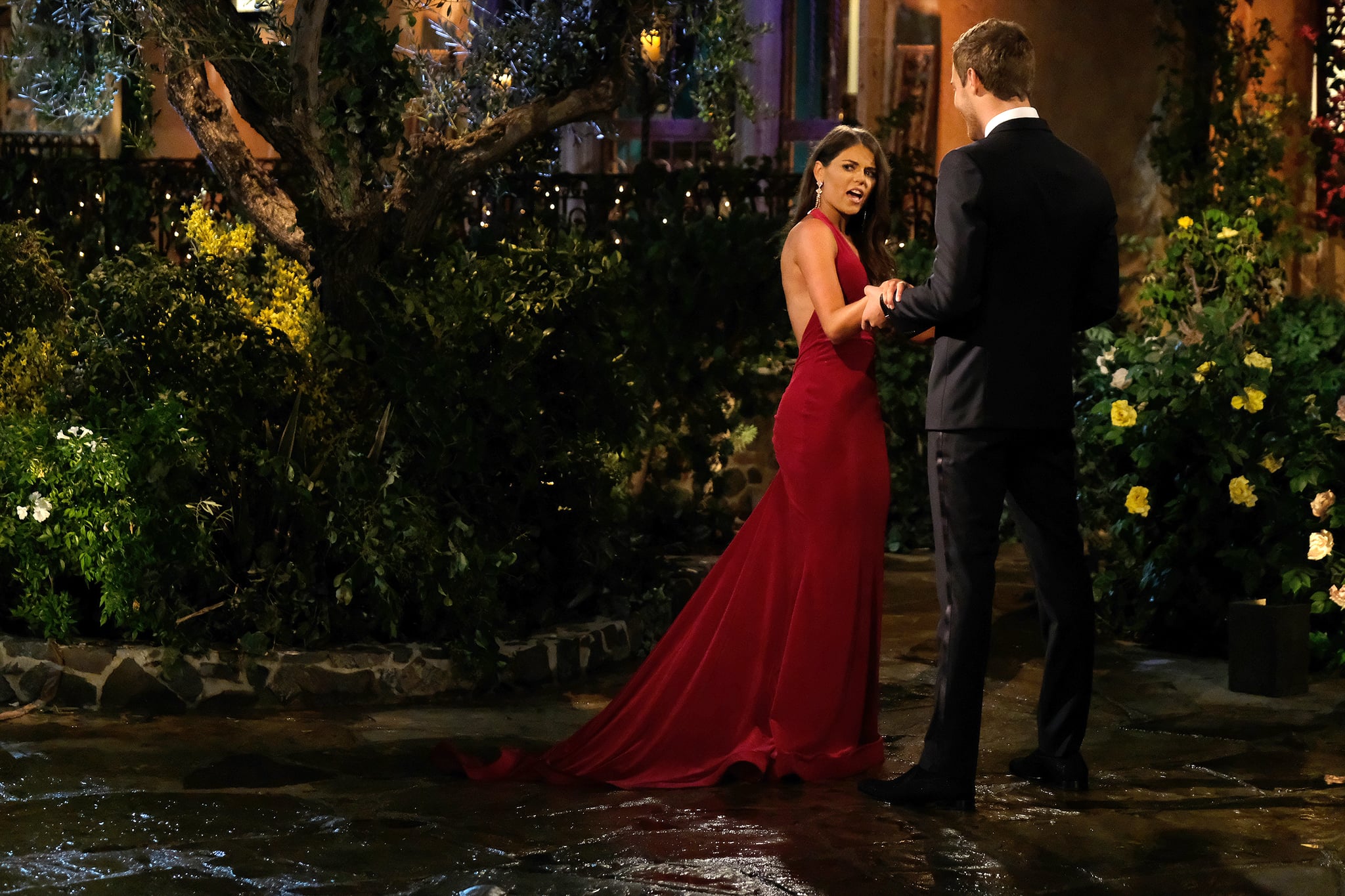 This week's episode of The Bachelor introduced a couple of particularly controversial twists: not only did Madison's virginity come up again when she didn't want Peter sleeping with anyone else during Fantasy Suite Week, but the production team put all three women in a shared suite, forcing them to get personal info about each other's overnight dates. The move is the latest in a season packed with overwrought manipulation, but this one feels nastier than usual because of how it twists deeply personal decisions and turns them into drama and fodder for onscreen mockery and criticism.

Choosing to be celibate until marriage is a personal and valid choice, just as choosing to have sex is — and how much that does or doesn't matter in a relationship. Instead, [it's become] another way to pit women against each other and make them cry.

Virginity has always been an issue with The Bachelor, and with this latest producer manipulation, it hammers home what many viewers have known for a while: the presence of sex on The Bachelor is pure gameplay. As much as the show tries to pretend that Fantasy Suites (and, by extension, sex) are about getting to know each other better with some rare privacy, it's really just part of the game. It makes sex cheap — not casual, which is totally OK, but cheap and grossly voyeuristic. With this obvious setup to ensure that Madison knows about her rivals' sexual escapades with Peter — and that they have the opportunity to gossip about her behind her back — it's clearer than ever that the only way the show really cares about sex is when it can create drama and get someone to break down in tears.

Madison's reaction to finding out Peter slept with the other women is the perfect example of how the show has skewed our view on things. In the "real" world, it would be reasonable if a woman told a guy that she was uncomfortable with him sleeping with other people while they were getting to know each other, and especially if they're at the "I love you" stage. Peter outright says, "Madison told me that if I were to be intimate with the other women, she might not be able to continue on the relationship with me." In Normal World, that's a totally ridiculous sentence to say! But on the show, Madison is the one who's made to seem unreasonable, by the producer edits and, in particular, by the commentary of her fellow contestants. Why? Because sex is just part of the show she signed up for. It's not meaningful, it' s just part of the game, and you play or refuse to play at your peril.

Not wanting the guy you're dating to be sleeping with other women (who you're also living with!) isn't unreasonable, but in Bachelor Land, it's the exact opposite. It's easy to initially draw parallels between Madison this season and Luke P. last season, who infamously tried to lecture and slut-shame Hannah Brown during the last season of The Bachelorette. But there's an important difference to consider. Where Luke immediately passed moral judgment on Hannah, Madison's situation stemmed more from a personal and emotional place. There was no implication that she thinks Peter is "sinful" or a bad person because he slept with the other women: it's solely about her personal feelings and her realization that this part of the game hurts more than she perhaps expected. This could have been a moment to talk about different expectations of sex — choosing to be celibate until marriage is a personal and valid choice, just as choosing to have sex is — and how much that does or doesn't matter in a relationship. Instead, it just became another way to pit women against each other and make them cry.

Related:
Everyone on Love Is Blind Is Conventionally Attractive, So What's the Point?

It's a shame, because a show that has the popularity and cultural reach of The Bachelor could really have an unusual opportunity to be a touchstone for much-needed conversations about sex and sexuality. During Hannah's Bachelorette season, it seemed like we were possibly getting somewhere. Not only was she open and playful about enjoying sex with Peter, she shredded Luke P.'s attempts to moralize at her. And, in what was possibly the most important but least talked-about decision, she chose to not sleep with Tyler Cameron because she didn't want their physical chemistry to overwhelm what they really needed, which was private time to talk for real.

This season, however, we're right back where we started. Part of it seems to be that the show has no idea how to handle virginity without making it something to judge (Hi, Luke P.!) or something to make endless jokes about (Hi, Colton!), so when Madison stuck to her decision, it had to be framed as high drama or as her being also naïve about what the show entails (which just brings us back to the problem of "gameplay"). Part of it, unfortunately, is likely because this is a Bachelor cycle rather than a Bachelorette one, meaning that the temptation for catty drama between women is too much for producers to resist. It's much easier to play into stereotypes of pitting women against each other, especially when you can paint some as "normal" and some as "prudes," than to have a nuanced conversation about what sex as modern women really means.